And the Worst Packaging Award for 2012 goes to… Foodstuffs 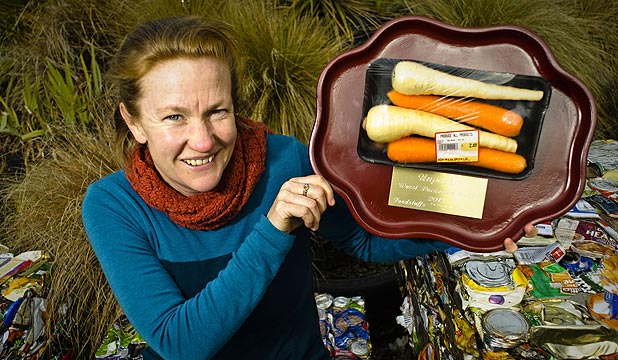 Foodstuffs have won Unpackit’s 2012 Worst Packaging Award for putting vegetables on polystyrene meat-trays and wrapping them in plastic.

More than 10,000 votes decided the Best and Worst Packaging Awards for 2012. The Best Packaging Award has been won by Bin Inn, with 33 stores who sell unpackaged products from self selection bins.

Unpackit Sophie Ward said the competition for both awards was intense this year, and the high number of votes showed that people really care about packaging and its impact on the environment.

“The plastic-wrapped vegetables on a meat-tray just managed to beat the individually wrapped prunes to take the Worst Packaging title, but there were only a few votes in it,” she said. “There’s a lot of ridiculous packaging out there, so it’s quite an achievement to be voted the worst packaging in New Zealand.”

Ms Ward said that supermarkets who sold plastic wrapped vegetables on polystyrene meat-trays were ignoring the environmental effects of their packaging, and she hoped winning the Worst Packaging Award would be a wake-up call for them.

Melissa Hodd, Executive Manager Foodstuffs New Zealand, said today that Foodstuffs accepts there is an onus on them, as a large retailer, to try harder to reduce the amount of polystyrene packaging used by their stores, in particular with regard to produce packaging.”

“Foodstuffs has recently set up a sustainability programme which is looking at packaging among other environmental projects. We would like to confirm that reducing the amount of polystyrene packaging used and identifying more sustainable alternatives is already a priority for this group, and receiving the Unpackit Award for Worst Packaging further solidifies our need to focus on this area of the business.”

Ms Ward said that while Foodstuffs were not the only ones putting vegetables on meat-trays, they had won the award because the original nomination from the public was for one of their stores: Franz Josef Four Square. This type of packaging is also commonly used in New World supermarkets around the country.

“Meat-trays can’t be recycled in most places in New Zealand, so both the cling film and the meat-trays go straight to the landfill. The most frustrating thing is that fruit and vegetables like carrots, parsnips, courgettes, grapes and avocadoes don’t need to be wrapped, they come with their own skins which protect them just fine. Packaging them is completely unnecessary and a waste of resources.”

Foodstuffs also won third place in the Worst Packaging Award for their meat multi-packs: four separately wrapped pieces of meat on meat-trays placed on a bigger meat-tray and wrapped in more plastic.

Ms Ward said getting rid of polystyrene meat-trays for meat packaging was a lot harder than stopping using polystyrene trays for fresh produce.

“Supermarkets sell their meat pre-packed for display, and there are not many alternatives which can deal with the blood. However I have seen chicken sold in recyclable plastic trays, and there are some new compostable materials which might be viable in the near future.”

For Unpackit’s Best Packaging Award, Ms Ward said she was delighted to announce today that the 2012 winner is Bin Inn, a New Zealand co-operative with 33 stores.
“Bin Inn sells a large range of products from bulk bins, which means people can take their own packaging and reuse it multiple times. Using less packaging means saving resources, and reduces the amount of waste going to landfill.”

“At Bin Inn we try and help customers reduce their packaging waste by encouraging customers to bring in their own bottles and containers to refill from the self selection bins and barrels. ‘Pay for product not packaging’ is central to the Bin Inn concept that was launched with our first store nearly 24 years ago.”

Ms Ward said she would like to thank all the community groups, schools, farmers markets and individuals who had got behind the Unpackit Awards and helped make them a success.

“The Awards are really a conversation starter, and a way for people to feed back to businesses what they think of their packaging. Without public support, they wouldn’t have taken off and grown in the way that they have.”