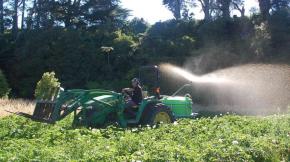 New Zealander Jenny Erickson used to grow organic lettuce and herbs in the USA – but when she struggled to find good-quality compost, her business took an unexpected new direction.

She went to a seminar on organic compost-making and realised her Utah farm was surrounded by massive amounts of perfect raw material – piles of unwanted cow-pats collected from indoor barns.

She started making compost for her own commercial garden and discovered the demand for the product was even greater than for her fresh greens.

The potential was so big that her American husband Steve soon became involved and together they built up a lucrative compost-making business.

Years later, when they moved to New Zealand, they found the demand for good-quality organic compost here was just as great.

They bought 80 hectares of land inland from Waihi, intending to grow organic crops – but soon found themselves making compost as well.

Today, 10 years after their return, they grow organic lemons, garlic and seed potatoes – but alongside that is a thriving compost-making business. Steve also draws on his long experience to act as a consultant to other organic compost-makers.

He was initially sceptical when Jenny proposed the idea of making their own compost, but once he saw what it could do, he became an enthusiast.

He believes good compost provides plants with everything they need to grow strong – but even more importantly, it gives them the resources they need to fight pests and disease, making most chemical sprays redundant.

Steve has started another business, which, like the compost-making, came about in an unexpected way.

He wanted to spray liquid compost onto his own farm, but found existing commercial sprayers wouldn’t do the job. The thick mixtures blocked the pipes and nozzles and the heavier ingredients kept falling to the bottom of the tank.

So Steve built his own spray unit from scratch, using a pump to create a vortex inside the tank that keeps even the thickest liquids well-mixed.

His ingenious device soon caught the attention of others and he now makes and sells them to farmers, with several local engineering shops helping to manufacture them.

To find out more about Steve and Jenny’s farm,  www.chaossprings.co.nz

For more about biodynamic farming,   www.biodynamic.org.nz

To learn more about getting the best from soil,   www.integritysoils.co.nz

For more about soil biology,   www.soilfoodweb.co.nz