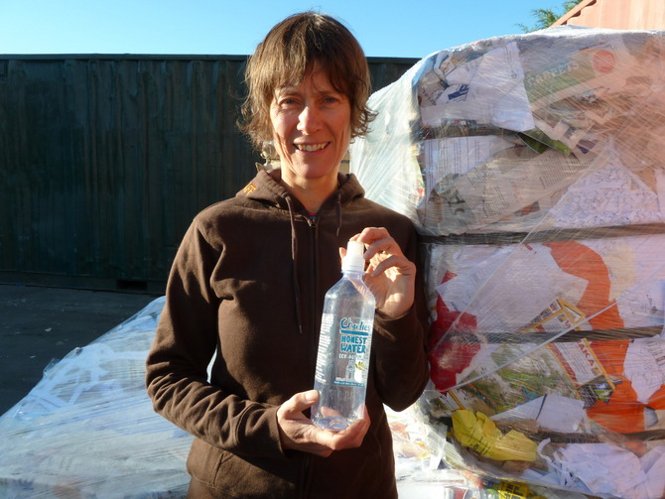 Recycler Wanaka Wastebusters is sending 1,232 Honest Water Eco-Bottles back to Charlie’s because Wastebusters can’t recycle them.

“Normally we pull them out and throw them in the rubbish. But we collected such a big quantity from Wanaka Warbirds over Easter that we decided to send them up to Charlie’s in Auckland and ask them to recycle the bottles.”

The labelling on the Charlie’s Honest Water Eco-Bottle includes a recycling symbol and the words “Care for your environment, please recycle.”

Ms Dempster said the labelling on the bottles is confusing for consumers and retailers.

“We have spoken to several shops in Wanaka, as well as the caterers from Warbirds, and they were all surprised to hear that we can’t recycle these bottles. They all said they wouldn’t choose them in future.”

“We’d like to see Charlie’s improve their labelling so that it has clear and accurate information about what actually happens to these bottles at the end of their life.”

Ms Dempster said the Wanaka recycling centre had done a lot of research to find out that recycling of PLA, which is made from plants, is in its infancy.

“The only reprocessing plants that we have traced are a pilot plant in Belgium and a small plant in the US. It’s extremely unlikely that PLA from New Zealand will end up in either of these countries, and it would also be prohibitively expensive to send bottles there.”

Ms Dempster said Wanaka Wastebusters has nothing against PLA as a material, but wanted to see clear and accurate labelling on packaging.

“We support the international move to change the identification code for PLA from a number 7 (which is the catch-all code for many plastics) to a new number such as a 0. That will make it clearer that PLA is a new plastic which requires a new infrastructure to be set up worldwide for recycling.”

Ms Dempster said anyone introducing a new or rarely used packaging material could talk to Wanaka Wastebusters or other recyclers to clarify whether it could be recycled in New Zealand.

“We’re always keen to talk, and we want to help businesses make environmentally responsible choices. That’s why we’re running Smartpackaging Business Workshops as part of the Unpackit project, funded by the Waste Minimisation Fund,” she said.

Wanaka Wastebusters will run Smartpackaging Business Workshops in Dunedin on 3rd May, Wellington on 10th May, Auckland on 17th May and Christchurch on 24th May . See www.smartpackaging.org.nz for details or contact Gina.

Natureworks (manufacturers of the “Ingeo” PLA which Charlie’s Honest Water Eco-Bottles are made from) website on the limited recycling infrastructure available for PLA.