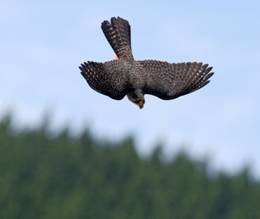 The New Zealand falcon (karearea) has been crowned Bird of the Year in Forest & Bird’s eighth annual poll.

“The karearea is a bird that’s most worthy of the title Bird of the Year,” says Forest & Bird Advocacy Manager Kevin Hackwell.

“As well as being a top predator that can reach speeds of up to 230km an hour and catch prey mid-flight, it’s a great romantic. During courtship, couples will perform an aerial ballet, swapping food mid-flight, performing mock attack dives or spiralling gracefully landward.”

Despite being an aerial daredevil, it is vulnerable to predation when nesting on the ground and is listed as ”threatened”.

A recent Department of Conservation study suggests that adult falcons are less able to defend their nest from predators than previously thought. “The NZ falcon nests on rocky ledges or on the ground, making it particularly vulnerable to predators such as cats, hedgehogs, stoats, weasels and possums.”

Each year, Forest & Bird volunteers put in thousands of pest-busting hours to keep safe threatened native birds such as the NZ falcon.

In the 2012 Bird of the Year poll, bird ambassadors fought hard to get their bird in the top spot and performed stunts from colouring competitions to sonnet performances. Saddleback campaigner Jackson James Wood even tattooed an image of his bird on to his bicep.

NZ falcon campaigner and comedian Raybon Kan was thrilled by his bird’s win. “I’m overjoyed that democracy has spoken. In tough times, the people need a hero. We need a bird that inspires us – an athletic bird that swoops from the sky, not some wheezy, pedestrian bird that’s a waste of feathers,” he says.

“If you have feathers and can’t fly, don’t complain that you didn’t win Bird of the Year. It’d be like Kim Dotcom trying to win Miss Universe. Not going to happen.”

The falcon is found throughout New Zealand.
They can catch prey larger than themselves and will kill prey with a quick powerful bite to the neck.
Falcons are fully protected under the law but, unfortunately, some are still illegally shot.
The falcon flaps its wings rapidly, compared with the larger Australasian harrier, which flaps its wings slowly, or glides.