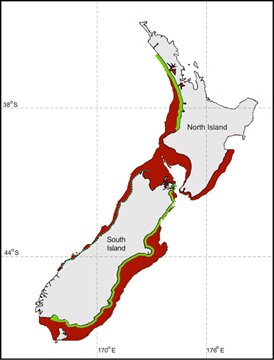 The map shows Hector and Maui dolphin distribution in red and protected areas in green. Forest & Bird wants to increase the current protection to include all areas where these rare dolphins are found.

Forest & Bird said today the deaths of two Hector’s dolphins in set nets was a tragic loss for the highly endangered species and urged that any offender should be prosecuted and punished.

The Ministry of Agriculture and Forestry said the two dolphins were found washed up on a north Canterbury beach this week. Set nets are banned along the South Island’s east coast out to four nautical miles.

“Hector’s are one of the world’s most endangered species of dolphins and the ongoing deaths in fishing nets threatens the survival of this magnificent species,” Forest & Bird Marine Conservation Advocate Katrina Subedar said.

“It is important that if the dolphins were caught inside the four nautical mile limit where set nets are banned that the offenders be caught and prosecuted.”

“Every death of a Hector’s dolphin is a tragedy because they are a long lived species and females take about eight years to reach adulthood and only produce one or two calves once every couple of years.”

The ministry said evidence suggested the dolphins were caught in a recreational rather than commercial net and Forest & Bird wants the ministry to make this evidence public.