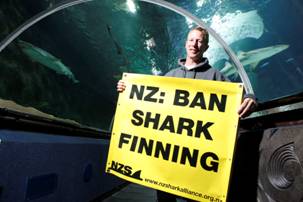 The ITM Fishing Show host Matt Watson says shark finning is a disgusting practice and is calling on the government to ban the practice in New Zealand.

Global shark populations have plummeted over the past 50 years, and the estimated 73-100 million sharks caught every year only for their fins, is contributing significantly to the decline.

Ninety-eight nations, including Australia, Canada, Ecuador and members of the European Union, have already banned shark finning. New Zealand is not one of them.

An NZSA spokesperson from Forest & Bird Katrina Subedar says New Zealand’s legislation, which bans finning of only live sharks, is shamefully out of line with the rest of the world.

“Shark finning – the practice of only removing the fins of the shark and dumping the body at sea – is extremely wasteful. Sharks are the top predators in the ocean and if we continue to remove large numbers just for their fins, then we could see a major collapse in our marine ecosystems.”

The shark finning industry is driven by high-market prices from Asia where the fins can fetch prices up to $1200 per kilogram, making it one of the world’s most expensive seafood items and a lucrative catch for commercial fishers.

The Ministry for Primary Industries is currently reviewing the National Plan of Action for sharks, which outlines fishing management strategies for the conservation and management of sharks and their long-term sustainable use.

An NZSA spokesperson from Greenpeace, Karli Thomas, says now is the time to act.

“This is the first time New Zealand’s shark plan has been reviewed since 2008, so now is our chance to end shark finning in New Zealand once and for all. Until we do that, our international reputation is at risk and we are letting down our Pacific neighbours, who, with far fewer resources than we have, are leading the world in shark conservation.”

Matt Watson says shark finning is the primary cause for the declining number and size of sharks, and he is disgusted the practice is still permitted on our waters.

“I’ve seen it with my own eyes. [Fishers are] getting them and they’re chopping those fins off … and that amazing bit of protein that the ocean’s produced is just being dumped overboard. To see a magnificent creature like a shark just killed and only its fins taken … it’s just a terrible waste and a crying shame.”

The NZSA is calling for all New Zealanders to voice their support to ban all shark finning.

“We need the public to tell the government that shark finning is not OK,” Katrina Subedar says. “This practice is hugely wasteful and unsustainable. If we don’t protect our sharks now we could lose some of them forever.”

New Zealanders can show their support by signing the pledge to ban shark finning in New Zealand on the NZSA website www.nzsharkalliance.org.nz. Information about making a submission will be available soon.