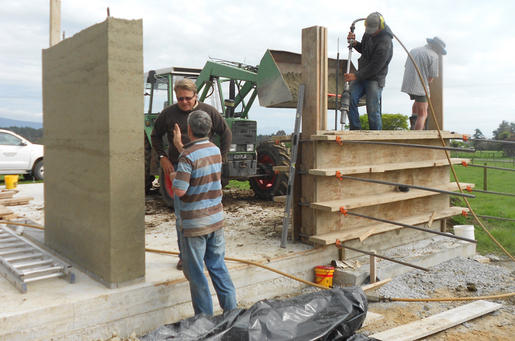 Walls rise like monoliths on this rammed earth building at Clifton. Architect Michael Robilliard (behind left) converses with Jimmy Cotter (Down to Earth Building). Rammers on right are Jeff and Shane. Photo: Gerard Hindmarsh.

Michael Robilliard is the design mind behind a unique rammed-earth family cottage under construction near Clifton in Golden Bay.

The Sydney-based architect didn’t have to look far for the perfect wall material for the project either, in this case FXG (Fines ex Grizzleys) road base metal direct from the Solly’s crusher at Tarakohe quarry.

“We chose the Tarakoke material for the walls because it is limestone just like the scenic reserve bluffs immediately behind the cottage, which means they will match. But the beauty of the FXG gravel is that it comes ready to use – it’s not only the perfect aggregate mix, but its clay particles form a superstrong bonding agent when aligned in the pneumatic ramming process. They actually end up attracting each other through their electrostatic force. A small amount of cement (six to 10 percent) gets added as a stabiliser in the wall filling and ramming process, not only to limit the expansion and contraction of the clay, but also as an additional strengthener. I ended up standardising the shape of all the walls to reduce the complexity of the form work and cost, but the walls’ charm is undoubtedly their monolithic quality.”

Steel reinforcing uprights are built into the wall at 900mm centres. Because rammed earth walls gain most of their strength as soon as they are made, the formwork can be stripped the following day and reused on the next wall. The surface just needs to be dampened with a mist spray for two weeks after the construction.

Garry Hodder in Nelson drew the structural plans for the building, while rammed earth expert Jimmy Cotter (from Down to Earth Building in Wanaka) came up to build the walls. Local structural engineer Richard Walker, who coincidentally has been involved in writing New Zealand standards for rammed earth, did the site inspections as work progressed.

Michael says he has been interested in earth construction, and in particular rammed earth (also known as “pise”), for many years.

“In the 1970s, two thirds of the world’s population still lived in earth houses. A Habitat Conference in Seattle was the catalyst for the setting up of a Department of Earth Construction, called Craterre, at the University of Grenoble in France, which has since produced a number of publications on the methodology of earth construction. I visited this school and toured the pise buildings which have been built around there for hundreds of years. You can easily recognise a ‘pise building’ because it has tell-tale holes in the walls at about half-metre centres, a remnant of its formwork construction.”

Michael says the advantage of rammed earth is that it is a low-carbon footprint method that creates a beautiful result.

“The beauty of the wall comes from the colours that reflect its mineral constitution. The surface reflects the smoothness of the plywood formwork and the evenness and control of the rammer in the compaction of the soil. Having a low percentage of cement means the limestone or whatever mineral you use will dominate the finished result.”

He married Silvia Greco in 2002, with whom he has two sons, Giulio and Filippo.

Says Michael: “Hopefully this cottage will be well used by the family, now into its second and third generation from Clifton.”

via The G.B. Weekly