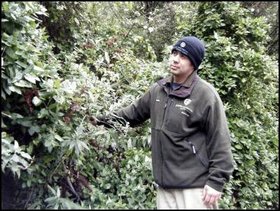 Bad bugs, weedy plants and pest animals are threatening our country, and during NZ Biosecurity Month in July, New Zealanders are being encouraged to find out what they can do about them.

“But everyone also needs to be aware that there are plenty of established pests already here causing damage to our environment, economy, and health.”

Recent research indicates that over 26 million eggs or chicks of native forest birds are destroyed by introduced predators, such as possums, rats, and stoats, each year.

This year’s biosecurity month theme is ‘Tomorrow’s Pests Today,’ which highlights the potential of introduced species, especially some plant species, to acclimatize to New Zealand conditions over time and start spreading into natural areas where they can cause major damage to ecosystems.

The good news is that there are plenty of things that people can do to play their part in keeping pests at bay.

“If people find out what to keep an eye out for, and take steps to control pests on their own properties, it will go a long way to protecting New Zealand from the impacts of these unwanted invaders,” says Pedro.

Visit www.biosecurity.org.nz to find out more about biosecurity, NZ Biosecurity Month, and what you can do to get involved.

NZ Biosecurity Month was launched by the NZ Biosecurity Institute in 2010 to raise awareness invasive pests. This year’s theme is ‘Tomorrow’s Pests Today.’

The New Zealand Biosecurity Institute has over 300 members from a wide range of government departments, universities, non-governmental organizations, crown research agencies and contracting companies. These include Department of Conservation, regional and local councils, National Institute of Water and Atmosphere, Landcare Research and Ministry of Agriculture and Fisheries.

The NZ Biosecurity Institute holds a National Education and Training Seminar (NETS) every year, with three days of presentations, fieldtrips and workshops allowing current issues in biosecurity to be discussed by the 200 or so delegates that attend. NETS2011 is being held in Auckland in July, and will showcase biosecurity success stories from around the country and the new research that has been done to improve biosecurity in New Zealand.